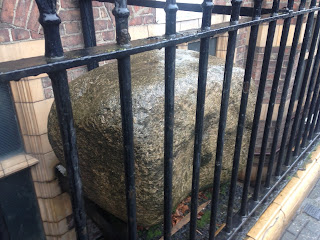 A large square-shaped boulder of granite mounted on an iron shelf behind railings between the pavement and Central House. An information board recording its history is located on the wall behind.
Darlington's oldest monument is a boulder of granite which bears neither plaque nor ornament and commemorates no individual person or event. The locally well-known street feature is said to have drifted here some 12,000 years ago.(1) Like other erratics at Piercebridge and Whitby, it originates more than 70 miles away in Shap and geologists suppose that it was brought here by glacial movement during the Great Ice Age.(2) There are those who believe that the town of Darlington was built around the ancient stone and legend has it that it turns around nine times when it hears the clock strike twelve.(3) One story is that George Stephenson and Nicholas Wood sat on the stone to tie their boots, having walked from Stockton to Darlington barefoot. For centuries the boulder was a significant local landmark, occupying as it did, a prominent position on Northgate's pavement, in close proximity to the road. Once called the 'Battling Stone', for a time it was used by weavers to flax their yarn. In the nineteenth century Willy Bulmer, Darlington's unofficial town crier, read the London news standing from the boulder and it is probably from him that it derives its name.(4) In 1923 its landmark status diminished when it was moved just 6 yards. Deemed a traffic hazard the stone was 'imprisoned' back from the road, behind iron railings and in the shadow of the Technical College. Outraged Darlingtonians wrote to the local paper in protest, some declaring that it was 'desecration' and 'vandalism' to move the stone from the spot where it had stood for many thousands of years.(5)

In Darnton towne ther is a stane,
And most strange is yt to tell,
That yt turnes nine times round aboute
When yt hears ye clock strike twell.

Bulmer's stone has been important to Darlington since the town's founding, both as a boundary marker and psychologically as a presence from another time and place. Throughout the world, a number of cultures venerate stones and rocks, believing them to host spirits. The local myth of Bulmer's stone turning nine times at midnight is particularly interesting. Like the story of Cinderella, the clock striking twelve signifies the transition from one day to the next and is therefore the moment of transformation, when one thing becomes another. Nine is a magic and sacred number, the number of completion and fulfilment and when multiplied, always reproduces itself. In the Tarot, nine is the card of the Hermit, symbolising self-examination and reflection.

Even though the myth pre-dates the industrial revolution it is telling that Stephenson and Wood are associated with the stone. Their association links Darlington's pre-history with its identity as an industrial centre whose development of rail transport – mechanised movement – was fundamental to the growth of our modern world. Joining this prehistoric 'spiritual' presence to the defining aspect of Darlington's contribution to the modern age brings another facet to the story, one that suggests a premonition-like quality to the stone. The myth of the stone seems to have identified the place where the movement of things will become most important, the site of railway development.

The development of passenger rail transport was seen by the public as something extraordinary, almost magical. Much of the technology invented during the industrial revolution was beyond public comprehension but passenger railways gave people a chance to physically experience mechanised movement for the first time, enabling them to be carried at what then seemed like great speed with no animate form of power. The inanimate engine seem possessed of its own power and was a thing of real wonder. This may have led to engines being named, a way of suggesting that the inanimate thing had a spirit or personality or was the host for some life force.

When Bulmer's stone was moved in 1923 to its present location behind railings, there was a lot of local protest. Even though the move was only six yards out of the roadway and towards the side of the street, the movement was seen as an act of vandalism, something almost sacrilegious. Caging the stone behind railings was also seen as wrong. In evicting the stone from its spot, all its meaning was undone. The force that had carried it there in the first place was compromised and the spell or magic meaning of the thing trashed. A similar caging happened to the London Stone at Canon Street. 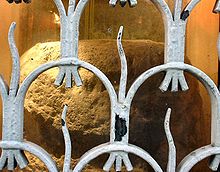 London Stone is a historic landmark traditionally housed at 111 Cannon Street in the City of London. It is an irregular block of oolitic limestonemeasuring 53 × 43 × 30 cm (21 × 17 × 12"), the remnant of a once much larger object that had stood for many centuries on the south side of the street. Currently the stone is housed at the Museum of London pending reconstruction of the 111 Cannon Street building.[1]


The name "London Stone" was first recorded around the year 1100. The date and original purpose of the Stone are unknown, although it is possibly of Roman origin, and there has been interest and speculation about it since at least the 16th century. There are modern claims that it was formerly an object of veneration, or has some occult significance. These assertions however, are completely unsubstantiated.

It's as if the act of putting these stones behind railings is an attempt to symbolically tame their occult powers. There's certainly no financial or practical reason for their imprisonment. Moving the stone back to its original position would be a political act, an attempt to reinstate a deposed power but doing so would be useless. An object restored like that is a fake, denying the act of vandalism ever took place.

The second association with 'rock' that comes to mind is through music. Many northern centres of industry became the birthplace of specific forms or music that echoed the heavily mechanised nature of life for workers. These forms gained a world audience after the invention of electronic amplification and modern popular music. Forms that music took not only mirrored fashions of the day but were, to a degree, influenced by the specific industrial activity and psychological impact of that activity taking place in their birthplace. Rock music in particular is associated with heavy industry. Although no great rock bands come from Darlington (is this true?) its easy to imagine how rail works and mechanised movement might have influenced musicians.

Not only does mechanisation facilitate movement and rhythm but also time keeping. For centuries, church bells were the means by which time was measured. Bells ringing marked the call to prayer and structured the routine and activity of the local community. Measuring time was primitive and intuitive but the industrial revolution changed that, developing devices that were incredibly accurate. Although at first their purpose was to help measure longitude and aid navigation, the by-product of their invention was the rigorous structuring of time. This meant that workers and the transport of materials could be organised with great efficiency through shifts and timetables but the social impact of this change was enormous. Whereas before, workers had organised their activity in a more organic, sympathetic way, time keeping now meant an oppressive regime that undermined a sense of freedom and autonomy, eroding political rights and physical well-being. 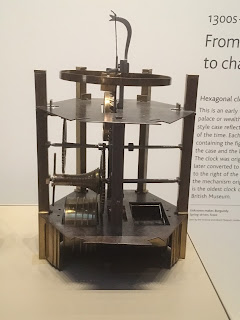 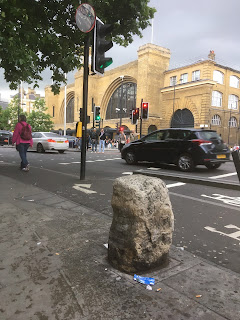 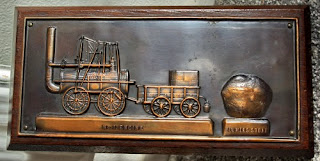 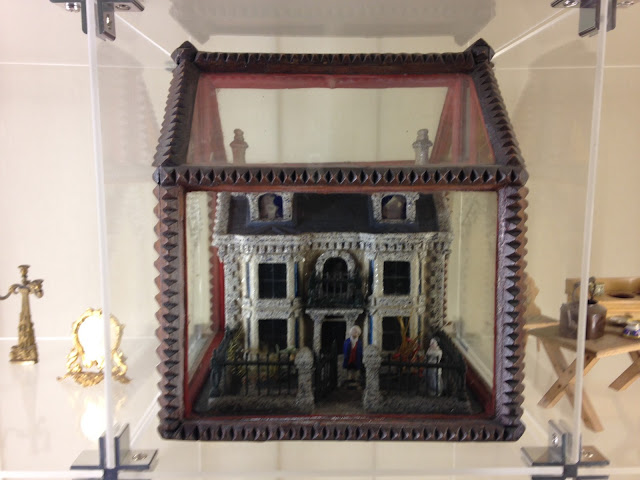 Visited the Bowes Museum just outside of Darlington. Our thanks to Lesley Taylor for showing us around. 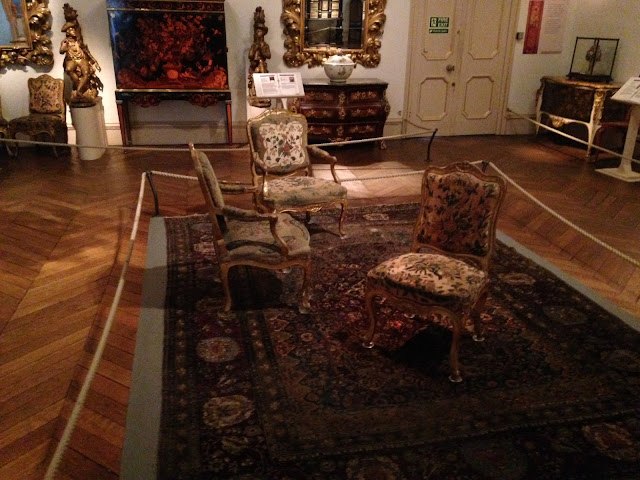 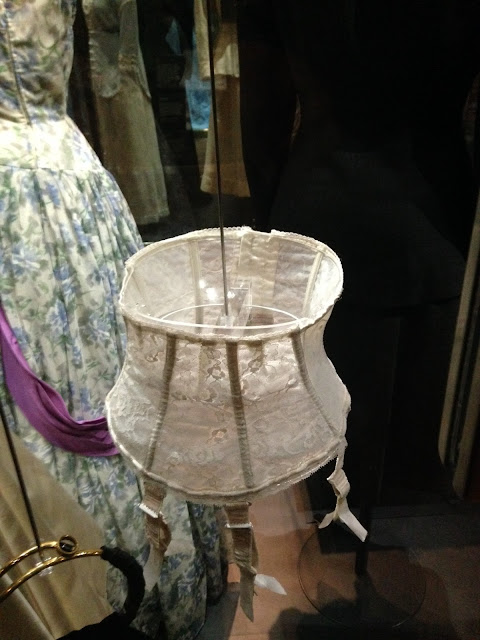 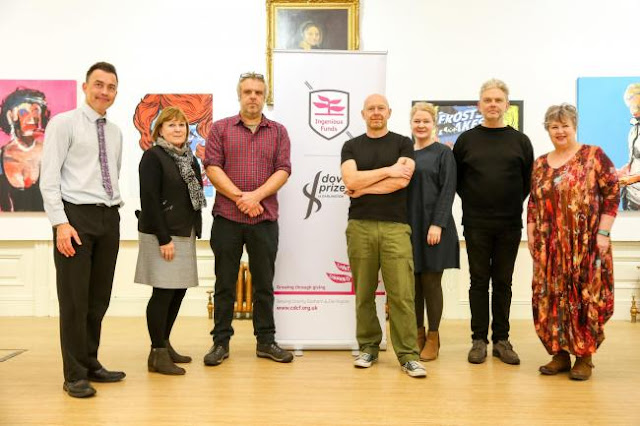 Doyle and Mallinson, winners of the Dover Prize 2016

Background to the Dover Prize
The Dover Prize Exhibition began in 1998 and it was a replacement to the Silver Longboat Competition, which ran from 1985 and had been set up by Hydro Polymers -a plastics manufacturer in Newton Aycliffe and Darlington. The Longboat made reference to the Norwegian origins of Hydro Polymers, Norsk Hydro. The annual art award, which attracted an average of 300 applicants from across the North East, provided prize money of £500 to the winner along with a silver longboat trophy. In 1998, Peggy Nonhebel (née Dover) set up an endowment - the Dover Family Fund - to help the Silver Longboat competition to continue in perpetuity, and to promote art and the education of art in and around Darlington.

Dover Prize 2016
The Dover Prize today is a 2-year bursary of £10,000 that will support excellence and experimentation in the arts and creative industries. The bursary will be awarded to an artist or artists to provide them with time to think, research, reflect and/or experiment with new ideas that will create work to be premiered in Darlington. This opportunity is open to any UK-based creative practitioner, individual or collective and will be awarded for work that meets the aims of the Dover Prize in raising the profile of contemporary arts in Darlington to make a positive impact on the town.


Our Dover Prize proposal was based around society’s relationship to technology and the gulf of understanding that exists between a device and its user. This lack of knowledge and empathy exists in an environment where technology users are not only engaged in the manipulation of devices but are themselves being manipulated and transformed in behavior and psychology. We see a body of work exploring this relationship to be relevant to users where such interactions occur thousands of times a day but for whom the actual mechanisms and materials involved are a mystery.
We’re also interested in the idea of obsolescence, that sometimes in-built mechanism that ensures the redundancy of the object. With the redundancy of an object also comes the redundancy of the actions, behavior and language that grew up around it.